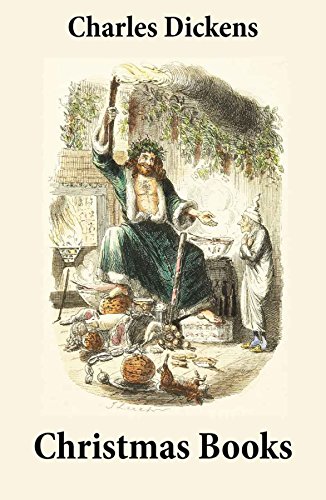 5 Christmas Books: Unabridged and Fully Illustrated: A Christmas Carol; The Chimes; The Cricket on the Hearth; The Battle of Life; The Haunted Man

This carefully crafted ebook: "5 Christmas Books (Unabridged and Fully Illustrated: A Christmas Carol; The Chimes; The Cricket on the Hearth; The Battle of Life; The Haunted Man)" is formatted for your eReader with a functional and detailed table of contents. A Christmas Carol The tale has been viewed by critics as an indictment of 19th-century industrial capitalism. It has been credited with restoring the holiday to one of merriment and festivity in Britain and America after a period of sobriety and sombreness. The Chimes The story of Trotty Veck, a poor ticket porter, whose outlook is changed from despair to hope by the spirits of the chimes on New Year's Eve. The Cricket on the Hearth Short tale written by Charles Dickens as a Christmas book for 1845 but published in 1846. The title creature is a sort of barometer of life at the home of John Peerybingle and his much younger wife Dot. When things go well, the cricket on the hearth chirps; it is silent when there is sorrow. Tackleton, a jealous old man, poisons John's mind about Dot, but the cricket through its supernatural powers restores John's confidence and all ends happily. The Battle of Life In this tale, the main characters live in a rural English village that was the site of an historic battle. The battle comes to symbolize the struggles these characters face in their daily lives. The Haunted Man Is a novella by Charles Dickens first published in 1848. It is the fifth and last of Dickens' Christmas novellas. The story is more about the spirit of the holidays than about the holidays themselves, harking back to the first of the series, A Christmas Carol. The tale centers around a Professor Redlaw and those close to him. Charles