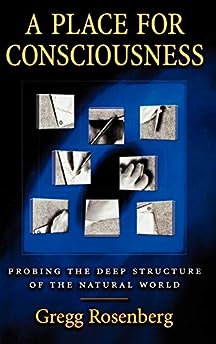 A Place for Consciousness: Probing the Deep Structure of the Natural World (Philosophy of Mind)

What place does consciousness have in the natural world? If we reject materialism, could there be a credible alternative? In one classic example, philosophers ask whether we can ever know what is it is like for bats to sense the world using sonar. It seems obvious to many that any amount of
information about a bat’s physical structure and information processing leaves us guessing about the central questions concerning the character of its experience.

A Place for Consciousness begins with reflections on the existence of this gap. Is it just a psychological shortcoming in our merely human understanding of the physical world? Is it a trivial consequence of the simple fact that we just cannot be bats? Or does it mean there really are facts about
consciousness over and above the physical facts? If so, what does consciousness do? Why does it exist?

Rosenberg sorts out these problems, especially those centering on the causal role of consciousness. He introduces a new paradigm called Liberal Naturalism for thinking about what causation is, about the natural world, and about how to create a detailed model to go along with the new paradigm.
Arguing that experience is part of the categorical foundations of causality, he shows that within this new paradigm there is a place for something essentially like consciousness in all its traditional mysterious respects.

A striking feature of Liberal Naturalism is that its central tenets are motivated independently of the mind-body problem, by analyzing causation itself. Because of this approach, when consciousness shows up in the picture it is not introduced in an ad hoc way, and its most puzzling features can be
explained from first principles. Ultimately, Rosenberg’s final solution gives consciousness a causally important role without supposing either that it is physical or that it interacts with the physical.