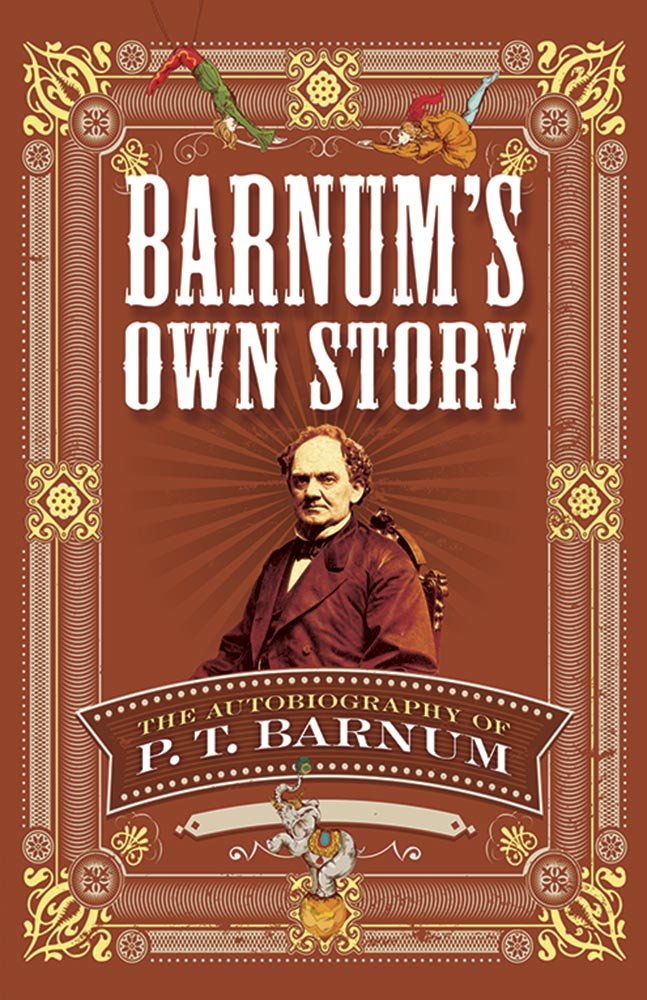 Barnum’s Own Story: The Autobiography of P. T. Barnum

P. T. Barnum’s career of showmanship and charlatanry was marked by a surprising undercurrent of honesty and forthrightness. His exuberant autobiography forms a happy combination of all those traits, revealing the whole story of his world-famous hoaxes and publicity stunts. Here is a pageant of nineteenth-century America’s gullibility and thirst for marvels, as told by the master of revels himself.
A born storyteller, Barnum recalls his association with Tom Thumb, his audience with Queen Victoria, and his trouble keeping Jenny Lind’s angelic image intact during a trying tour. He tells of Jumbo, the most famous elephant in history, from the creature’s heroic arrival in America to its tragic death in a railroad accident; of his attempts to transfer Shakespeare’s house and Madame Tussaud’s Waxworks from England to New York; and of his triumphant reentry into public life after financial failure and five disastrous fires had all but wiped him out. The true-life tale of a man of boundless imagination and indomitable energy, Barnum’s autobiography embodies the spirit of America’s most exciting boom years.

Phineas Taylor “P. T.” Barnum formed the circus that came to be known as The Greatest Show on Earth. A brash, larger-than-life entrepreneur, he transformed the nature of commercial entertainment in the 19th century, from his private museum of curiosities to his big-top extravaganzas. Barnum introduced audiences to General Tom Thumb, Jumbo the elephant, and Jenny Lind, “The Swedish nightingale,” among other sensations. He concluded his career by serving two terms in the legislature of his home state, Connecticut, and as the mayor of Bridgeport.

The Art Of Money Getting

P. T. Barnum’s guide to prosperity offers practical advice for personal success. Rather than schemes for acquiring wealth, the great showman presents 20 rules for the development of character and for cultivating habits that will insure financial security. His timeless counsel ranges from choosing the right vocation and avoiding debt to preserving integrity and maintaining courtesy. (0486836134)

As relevant today as it was upon its 1880 publication

Timeless counsel from a legendary impresario

Barnum’s career of showmanship and charlatanry was marked by a surprising undercurrent of honesty and forthrightness — and his exuberant autobiography forms a happy combination of all those traits. In a classic of self-accusation and self-justification, he reveals the stories behind his famous hoaxes and publicity stunts, exposing 19th-century America’s gullibility and thirst for marvels. Illustrations throughout. (0486811875)

In 1871, he launched the traveling spectacle that would become the Ringling Bros. and Barnum & Bailey Circus

The true-life tale of a man of boundless imagination and indomitable energy.