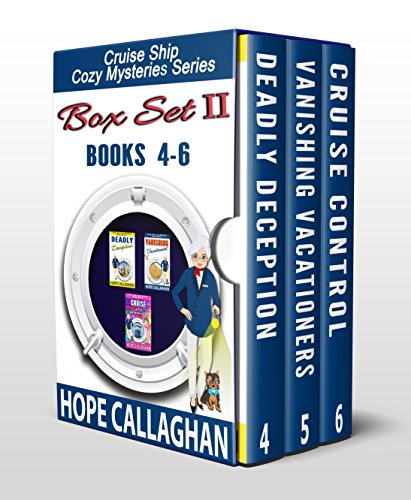 Treat yourself to books 4-6 in the ORIGINAL Cruise Ship Cozy Mystery Series!

Life on board Siren of the Seas has been smooth sailing for Millie Sanders, but that soon changes when diva, Ariana Teliar boards as the ship’s new entertainer and "star attraction."

Unfortunately, Millie has been given the task of showing Ariana the ropes. When Ariana discovers a dead body on her balcony, Millie’s “task” changes to protecting the diva’s life 24 hours a day! The only problem is, Ariana has a penchant for disappearing and Millie is forced to chase her down.

When Ariana leads Millie and her friends on a wild goose chase thru Mayan ruins deep into the rainforest, and they end up getting lost, it’s the last straw for Millie. Just as Millie is ready to set the young performer straight, she discovers a deadly deception that puts Millie’s own life in danger.

Can Millie sort through the clues that point to the killer(s) and solve the mystery before it’s too late?

With a fresh wave of passengers soon to board the Siren of the Seas, Assistant Cruise Director Millie Sanders is shocked when she discovers she has a new roommate and fit to be tied when she learns the new roommate is none other than Danielle Kneldon, her former charge and nemesis!

Danielle’s first assignment is to ensure the ship’s special "VIP’s," a family who has won a cruise contest, have a wonderful, fun-filled vacation.

Millie discovers her coworker has other plans, which includes searching the small island of Kiriban for a missing family and collecting a hefty reward.

When Danielle, along with two of the VIP guests, vanish on the mysterious island, Millie is forced to face her fears and join the search. She enlists the help of her friends and soon they find themselves in a deadly adventure of a lifetime.

Will Millie and the gang track down Danielle and the missing passengers before the ship leaves port or will they become the next victims of the island’s curse?

The long anticipated, epic cruise adventure is finally here! Two worlds collide when Gloria and the Garden Girls meet up with Gloria’s cousin, Assistant Cruise Director, Millie Sanders and her crew aboard the passenger cruise ship, "Siren of the Seas."

Almost immediately, suspicions are raised when a group of mysterious passengers board and then head straight to the bridge for a private meeting with the captain. Not long after, Andy Walker, Millie’s boss, tells her the ship will have some "temporary" staff boarding for this cruise, something that has never happened before.

Later, after the ship sets sail, Millie stops by to greet the captain and Scout, and sparks fly when the captain invites Millie to dine with him in his apartment the following evening. When Millie arrives for her dinner date the next night, she discovers the bridge is locked and no one will answer the door.

At first, Millie is heartbroken, believing she has been stood up, but soon discovers that something sinister is going on inside the bridge after communications onboard are cut off and the ship stops moving.

Will Millie and her friends, with some help from Gloria and the Garden Girls, be able to figure out who has taken control of their cruise…or will they all become dead in the water?

Scroll up and grab your copy by clicking the Buy Now or Read for Free button!

A lonely widow finds new purpose for her life when she and her senior friends help solve a murder in their small Midwestern town.

If you like clean, fun-filled mysteries that keep you guessing until the end, you’ll love this series!

You’ll enjoy the same fun-loving characters as they solve mysteries in the cozy town of Belhaven.

Each book will focus on one of the Garden Girls as they enter their “golden years.”

Made in Savannah Mystery Series

After the mysterious death of her mafia “made man” husband, Carlita Garlucci makes a shocking discovery.

Follow the Garlucci family saga as Carlita and her daughter try to escape their NY mob ties and make a fresh start in Savannah, Georgia.

They soon realize you can run but can’t hide from your past.

After relocating to the tiny town of Divine, Kansas, located at the centermost point of the United States, strange and mysterious events begin to transform the lives of businesswoman, Jo Pepperdine and those around her.

Heartbroken after her recent divorce, a single mother is persuaded to book a cruise and soon finds herself caught in the middle of a deadly adventure. Will she make it out alive?