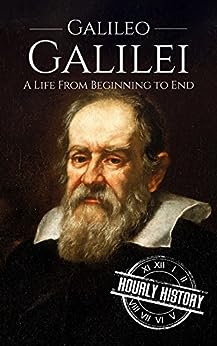 Galileo Galilei: A Life From Beginning to End (Biographies of Physicists Book 3)

Galileo Galilei began his career as a mathematician. Yet as fate would have it, he became far more than a numbers whiz. Here was a true Renaissance man; one who was greatly educated and a genuine lover of the arts. He was a fan of poets and a fine lute player.
When in 1609 Galileo created his first telescope and turned his attention to the skies, everything changed. His discoveries as they came, could not be denied. Because of his years of study in the arts and humanities, Galileo was well prepared to bring his ideas into the light of day.

Inside you will read about…

✓ Living in the Italian Renaissance
✓ Student Becomes Master
✓ Opposition to the Church
✓ Controversial Theories
✓ The Trial of Galileo Galilei
✓ The End of All Things
And much more!

Discoveries often don’t come easy and introducing them to a doubting world is even more challenging. It takes a certain kind of person to do that and Galileo was just the man for the job. It was his brilliance that supported the Copernican system of how the solar system was laid out. It was his original thinking which kept him fearless in the face of the greatest adversary there was—the Church.
Come along to discover what made Galileo so great. And why his achievements can influence your life, too.