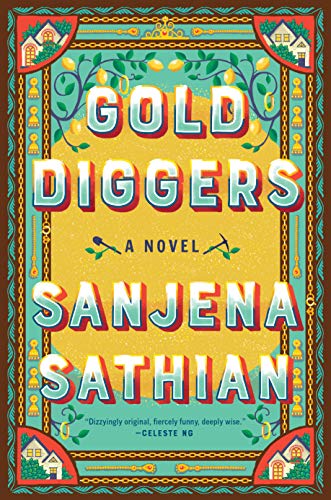 How far would you go for a piece of the American dream?

A magical realist coming-of-age story, Gold Diggers skewers the model minority myth to tell a hilarious and moving story about immigrant identity, community, and the underside of ambition.

A floundering second-generation teenager growing up in the Bush-era Atlanta suburbs, Neil Narayan is funny and smart but struggles to bear the weight of expectations of his family and their Asian American enclave. He tries to want their version of success, but mostly, Neil just wants his neighbor across the cul-de-sac, Anita Dayal.

When he discovers that Anita is the beneficiary of an ancient, alchemical potion made from stolen gold—a “lemonade” that harnesses the ambition of the gold’s original owner—Neil sees his chance to get ahead. But events spiral into a tragedy that rips their community apart. Years later in the Bay Area, Neil still bristles against his community's expectations—and finds he might need one more hit of that lemonade, no matter the cost.

Q & A with Sanjena Sathian

Q: How did you come up with the gold conceit?

A: I remember gold thefts happening in the Atlanta suburbs. I think they occurred in New Jersey and California, too. It’s sort of an obvious crime if you know anything about Indian households — a lot of people just keep loads of gold in the house, and in consistent locations. (Please don’t go steal it now, dear reader.) A few non-Indian gangs were held responsible for the crimes, but my mom always said she thought Indians had to be involved, as collaborators or something else, because these gangs seemed to know how to get exactly what they needed. I had that idea in my head for a while, and I wondered about writing an unlikely Indian American gold thief. The idea became magical at some point early on. I was writing all speculative fiction at the time I started this book, so my brain just turned every idea I had into magic. It was fun.

A: Some of the novelists who have most influenced me, like Zadie Smith and Philp Roth, seem to speak to a kind of “we,” chronicling individual human experiences in a way that accesses a wider story. I did have a desire to represent a collective experience of second generation Indian Americans, and I’ve heard from other desis like me that this story resonates with their life stories — that’s so edifying and moving. I do think that it’s important to note that I never intended to speak for one monolithic experience, however. There are Indian Americans who didn’t grow up in the suburbs — I think of my friends from Queens — whose life experiences are so different. The story in GOLD DIGGERS also features predominantly upper middle class and dominant caste Hindus and Jains, along with some upper middle class Muslims. That’s an accurate representation of the bubble I grew up in, but it’s not the experience of everyone. Because there’s been insufficient representation of our community, I think a lot of folks enter work like mine hoping to see every kind of Indian.

Q: What made you choose humor or a slight satirical tone to tell this story?

A: Honestly, I didn’t realize I was “funny” for a while. And GOLD DIGGERS isn’t satire — it’s got so much pain in it alongside the humor. I think the comedy helps the pain go down more easily, and that matches my personality. Therapists chide me for being snarky when we’re supposed to be talking about serious, heartachey stuff. So in that sense, it’s just my worldview. I think the way I grew up was kind of comical. I could be parodically intense, like Neil’s debate partner Wendi or Anita herself. And my fights with my family could be painful but also have a kind of classic American comedy to them — there’s something inherently goofy about sneaking around, trying to be “cool” and rebellious while also being totally nerdy. I think comedy can also serve as a way to level critiques, and in that sense it arose organically. When I began to see what was funny about the way I grew up, I also began to see what was wrong with the values my community treasured.