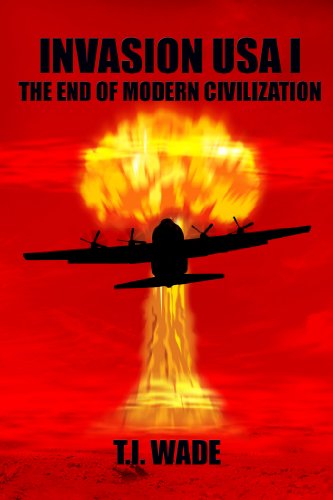 At exactly midnight on December 31, every electronic device made in China for the last 30 years stops working!

From the U.S. electrical grid and all its back-ups, engine control-management systems, early warning systems on U.S. satellites, every motor vehicle, aircraft and ship made after 1985, to even simple memory chips inside children’s teddy bears—every electronic fuse, resistor, or connector that was “Made in China” becomes dormant… forever.

At one minute past midnight on January 1st, every modern television broadcast of the U.S. New Year’s Eve festivities on the East Coast black-out. Millions of motor vehicles with an engine management system or engine-computerized system suddenly die, causing loss of control and thousands of accidents only seconds into the New Year. Traffic lights, directional beacons, communication stations, and all aircraft landing systems black out a couple of minutes later, as their modern back-ups start failing. Children’s Christmas presents, nearly forgotten, stop buzzing, moving, and blinking and go silent. Radios, computers, and all forms of electronic communication devices—even the latest 132 million electronic Christmas presents given only a week earlier (iPhone 5Gs, IPod Nano 4s, IMac Notepads and iPad 3s) go silent, never to blink on again. Ninety seconds after midnight, the entire electrical grid of North America deactivates itself and goes into close-down mode.

The shutdown of the United States of America, and 97% of the entire world, is accomplished by 12:30 am U.S. Eastern time on the first day of the New Year.

It takes only 30 minutes to completely dismantle the whole of modern Western civilization.

This is the first of four novels based on the premise that China could dominate the world by destroying every other nation’s modern electronics. The Chinese planned a sudden and violent take-over of the U.S. (in a matter of weeks!) due to bitter winter weather; America’s own self-destruction fueled by unlimited private arms and ammo; and the absence of 1,250,000 troops all engaged in overseas wars. [Oh, yes, our author has a few "agendas" going on here.] Those who did not freeze were expected to fall to barbarism. America’s new owners would arrive in New York with a special fleet of ships filled with food packs and Chinese passports for the few lucky serfs. (Men would all be killed; women enslaved.)

This "set up", while dubious, is sufficiently possible to ground the entire series. Most dystopian novels of WWIII show individual and community battles for survival. This series "steps back" from the terrors taking place around the world as mankind is reduced to "feudal age" mechanics; starvation; and the disappearance of any rule of law. Hundreds of millions in the US and billions around the world quickly die, but the individual stories of mayhem and slaughter are never explored in detail. Instead, we begin our odyssey through the eyes and lives of WWII propeller plane fanatics whose dated systems were not destroyed when China pushed its "destruct" command for millions of "made in China" computer chips, parts, and machines. The heroes and heroines who can "make do" with antiquated equipment are followed throughout the entire series.

The novels captivate, because our heroes are complex and admirable characters. From the start, they exhibit a ferocity of self-reliance and purpose to preserve first their fly-in farm, then their community, and finally, the nation. This first novel, to me, was the best so far. It includes a somewhat unusual "back-story" of Columbian drug trafficking and revenge which serves as the gritty preface to novels 3 and 4. There’s lots of action; strong female leads; great armed service leaders, and lots of gutsy American know-how–but no "air to air" combat until later books.