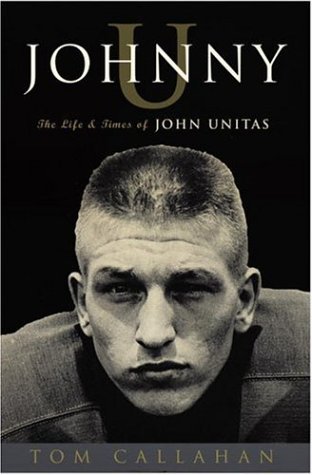 Johnny U: The Life and Times of John Unitas

In a time “when men played football for something less than a living and something more than money,” John Unitas was the ultimate quarterback. Rejected by Notre Dame, discarded by the Pittsburgh Steelers, he started on a Pennsylvania sandlot making six dollars a game and ended as the most commanding presence in the National Football League, calling the critical plays and completing the crucial passes at the moment his sport came of age.

Johnny U is the first authoritative biography of Unitas, based on hundreds of hours of interviews with teammates and opponents, coaches, family and friends. The depth of Tom Callahan’s research allows him to present something more than a biography, something approaching an oral history of a bygone sporting era. It was a time when players were paid a pittance and superstars painted houses and tiled floors in the off-season—when ex-soldiers and marines like Gino Marchetti, Art Donovan, and “Big Daddy” Lipscomb fell in behind a special field general in Baltimore. Few took more punishment than Unitas. His refusal to leave the field, even when savagely bloodied by opposing linemen, won his teammates’ respect. His insistence on taking the blame for others’ mistakes inspired their love. His encyclopedic football mind, in which he’d filed every play the Colts had ever run, was a wonder.

In the seminal championship game of 1958, when Unitas led the Colts over the Giants in the NFL’s first sudden-death overtime, Sundays changed. John didn’t. As one teammate said, “It was one of the best things about him.”