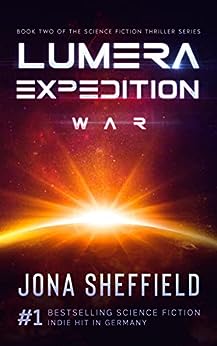 “One of the best SciFi books of recent times. The plot was never really predictable and the story is described in a multifaceted way, so that you are literally pulled into the action.” —Torsten

“Wow, what a sequel! I could hardly put the Kindle down.” —Niklas Lowenstein (bestselling author)

“Perfect, very well and fluidly written. I am thrilled.” —Oliver

Jona Sheffield is currently Germany’s most successful female indie author in science fiction. She uses the technologies and climate problems of our present to envision two fascinating glimpses of the future at once, linked by suspense, pace and depth. All volumes of her page-turning sci fi thriller series “Lumera Expedition” have become German best-sellers for months in categories like space opera, first contact, dystopian and technology thriller and have already delighted hundreds of thousands of readers.

Sheffield, born in 1978, studied international maritime economics because foreign destinations have always fascinated her. As managing director of a German media company, she headed an editorial department and published numerous texts of her own. She then combined her passions for great (literary) adventures and outer space with her commitment to climate change by creating the Lumera universe. She is the founder of the #SciFiForFuture movement.

Sheffield’s new thriller series “Transform” was published in early 2022 in Germany and became a German Kindle best-seller in the categories science fiction, adventure, first contact, space opera, dystopian, environmental destruction, and technology thrillers. It will be released in English later this year.

Long ranked #1 in several science fiction categories, “Lumera Expedition: War” has already delighted hundreds of thousands of readers. In the second episode of the Lumera series, humans explore the fantastic but also very dangerous planet of Lumera and encounter the Kidj’Dan, a telepathically gifted alien race. Will humanity repeat the mistakes of its past?

For fans of suspenseful science fiction thrillers that focus on people and their actions rather than technology.

Leserkanone: Who do you recommend your books to?

Jona Sheffield: Fans of “The Expanse,” “Avatar,” “Star Trek” or “Star Wars” will immediately feel at home with me. My books focus on the characters and their actions, not the technology.

LK: In your book, you paint an ominous picture of the future, in which the Earth is facing its end. Why?

JS: Technology has always captured people’s imagination. But I am depressed by mankind’s reckless treatment of our planet. My books are meant to shake us up and make us aware of the possible consequences of our actions. I want to entertain – but with a clear message.

LK: What can we expect from you in the near future?

JS: I’m focusing on more thrillers in the Lumera universe. I have so many exciting stories in my head and I’m looking forward to sharing them with my readers. The next Lumera thriller will be called “Syndicate”.