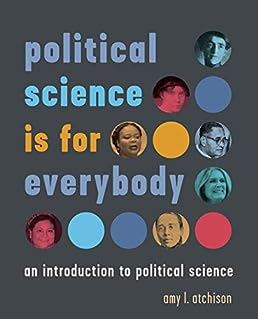 BACKGROUND TO POLITICAL SCIENCE IS FOR EVERYBODY

Obviously, there are many factors at play – era, location, culture – but for simplicity’s sake, let’s think about people who are viewed as legitimate and authoritative research scientists (they get a lot more publicity than historians or political scientists).

1 Think about scientists who are famous because they are considered foundational to the production of scientific knowledge.

2 Take a minute to make a list of three to five scientists that you can name with[1]out thinking too hard about it.

What was the point of this brainstorming exercise? To demonstrate that knowledge production, and the group of people whom we consider to be legitimate producers of knowledge, has traditionally been dominated by men of European heritage. Yes, people of color and women have produced important and insightful scientific knowledge; historically, however, most have either been barred from research or had their achievements attributed to white male scholars.

It’s not that white guys don’t know things – they know all sorts of cool things! It’s that other people also know things. Members of dominant groups don’t often ask how marginalized groups experience the political world – there’s an assumption that what works for the dominant group must work the same way for every[1]one. But when all the knowledge that is widely shared comes from the dominant group, we get an incomplete picture of how the political world works. When textbooks are written from only the dominant perspective, you, the political science student, may be left with the impression that political institutions are neutral and unbiased. Except we know that’s not true. Think about the fact that racial and ethnic minorities are often punished more harshly for the same crimes than the dominant ethnic/racial group in your society. Think about the fact that women experience a wage gap in every country around the globe. Both of those facts are a result of social and political factors that help dominant groups and harm minority and marginalized groups.

About the Editor Amy Atchison

Dr. Amy L. Atchison is an associate professor of political science and international relations at Valparaiso University. Her research interests include gender and poli tics, social welfare policy, and the status of marginalized groups in political science. She is the co-author of Survive and Resist: The Defi nitive Guide to Dystopian Politics with Shauna Shames (Columbia University Press, 2019). Her research has been published in a variety of journals, including Poverty and Public Policy ; Politics & Gender ; PS: Political Science and Politics ; the Journal of Women, Politics, and Policy ; the Review of Policy Research ; and the European Journal of Politics and Gender

Introduction Background to political science is for everybody

The Structure of the Book Final Note

Section I: The Foundations of Politics

1. What are the Foundations of Politics?

2. Political Theory and the Intersectional Quest for The Good Life

Dr. Brooke Ackerly is a professor of political science at Vanderbilt University and co-editor-in-chief of the International Feminist Journal of Politics 2018–21).

Dr. Tiffany D. Barnes is an associate professor and a director of undergraduate studies at the University of Kentucky.

Victoria Beall is a fifth-year PhD student and teaching assistant at the University of Kentucky studying political science with a focus in comparative politics and international relations.

Dr. James Brassett is a reader in international political economy at the University of Warwick, UK. His work engages the everyday politics of globalization with a focus on questions of ethics, governance, crisis, and resistance.

Anna Carella is a PhD candidate in the Department of Political Science at Vanderbilt University.

Dr. Pedro A . G. dos Santos is an associate professor of political science at the College of Saint Benedict and Saint John’s University and has also taught at Luther College.

Dr. Juanita Elias is a professor in international political economy at the University of Warwick.

Dr. Silvia Erzeel is an assistant professor at the Department of Political Science of the Vrije Universiteit Brussel (Belgium).

Dr. Jillienne Haglund is an assistant professor of political science at the University of Kentucky.

Dr. Farida Jalalzai is the associate dean for global initiatives and engagement at Virginia Tech. Dr. Meryl Kenny is a senior lecturer in gender and politics at the University of Edinburgh.

Dr. Liza Mügge is an associate professor in the Political Science Department and research theme leader of the Diverse Europe group of the Amsterdam Research Centre for European Studies, both at the University of Amsterdam (UvA).

Dr. Raul Pacheco-Vega is an associate professor in the Methods Lab at the Facultad Latinoamericana de Ciencias Sociales (FLACSO-México).

Dr. Erica Townsend-Bell is an associate professor of political science and director of the Center for African Studies at Oklahoma State University.