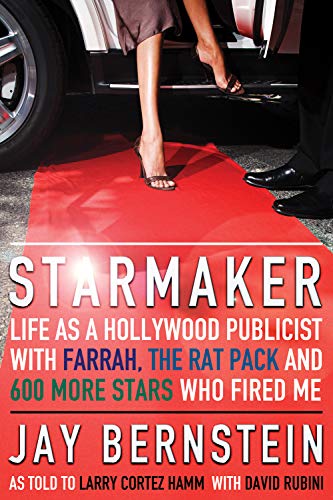 Starmaker: Life As a Hollywood Publicist with Farrah, The Rat Pack and 600 More Stars Who Fired Me

This memoir by the legendary publicist offers “an intimate glimpse into the best and the worst of the golden age of Hollywood” (Stacy Keach, Golden Globe Award–nominated actor).

Jay Bernstein, an entertainment industry fixture who helped launch the careers of celebrities including Farrah Fawcett and Suzanne Somers, was famed for his sense of showmanship, his outrageous style, and the publicity stunts he engineered to get attention for his clients. Starmaker tells his story, from his childhood in Oklahoma City and his first job in a Hollywood mailroom to the ownership of his own public relations firm and his work as a television producer.

In addition to a behind-the-scenes look at several generations of show business and hard-hitting insights about how the industry changed over the decades, Bernstein also describes the relationships he had with stars and his notorious techniques, such as paying women to throw hotel keys at Tom Jones, having Entertainment Tonight host Mary Hart’s legs insured for one million dollars, and getting married underwater for an episode of Lifestyles of the Rich and Famous. With the wisdom of experience and a sense of humor, this autobiography shares the intimate details of a fascinating Hollywood life.