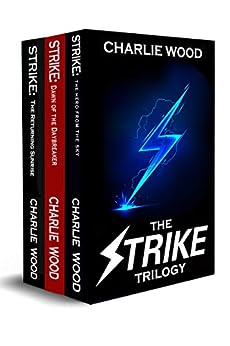 Tobin Lloyd’s life is perfect: he’s a senior at Bridgton High, he’s one of the funniest kids in school, and his only worry is whether or not his latest prank is going to result in yet another detention.

But when he wakes up in the world of Capricious, a place where superheroes are real and attacks by super-villains are just another hassle of living in the city, all of that changes. Suddenly, Tobin’s last year of high school is not going as he expected.

Far from home and pretty sure he’s gone insane, Tobin must join a strange group of companions (including a beer-drinking dog and a genius, three-foot-tall robot) as he begins his harrowing quest to get back to the world of Earth.

However, there is a disaster looming on the horizon: the most powerful super-villains of Capricious see the weak, chaotic planet of Earth as a grand opportunity, and they have a plan for conquest. Together, they are searching for a mysterious creature known as the Daybreaker–a super-villain so powerful that no one on Earth–or Capricious–will be able to stop it.

Who is this Daybreaker? Where did he come from? And what is his connection to Tobin’s new friends? The answers to these questions will lead Tobin down a road he may never recover from, newfound superpowers or not.

This collection includes the first three books of The Strike Series: THE HERO FROM THE SKY, DAWN OF THE DAYBREAKER, and THE RETURNING SUNRISE.