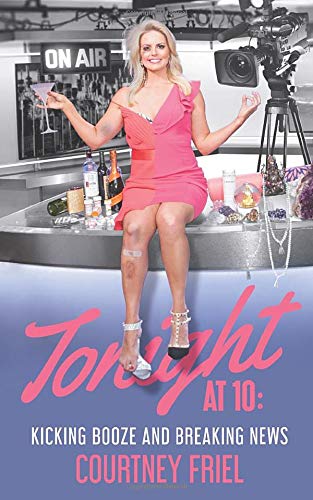 THE INSPIRING ADDICTION MEMOIR THAT MADE HEADLINES EVERYWHERE
As a teenager, Courtney Friel was a shy girl tormented by constant, cruel bullying. Then, at the age of 15, she got drunk for the first time. That’s when she formed her alter ego, “Reporter Friel”–a whip-smart girl who partied hard, bulldozed any haters in her path and went on to become the youngest on-air anchor ever hired at Fox News.

After falling in love with the big city and the fast life of broadcast television, Friel moved to New York City, married a handsome fellow newscaster and had two beautiful children. Her career and her status were skyrocketing, and from the outside, her life seemed perfect. In reality, Friel was living a double life as a professional newscaster by day and a debauched party girl by night.

To keep the trauma of the mass shootings, murders and car accidents she covered at bay, Friel drank more alcohol and ramped up her use of Adderall, Xanax and cocaine…until she ended up in rehab. What came next was a rocky divorce, a spiritual crisis and a hopeful shot at a new life–if she could reckon with who she really was.

In Tonight at 10, Friel gives her tell-all account of everything from paying off cops in Mexico after a cocaine bust to sober sexcapades to, ultimately, adventures in holistic healing to achieve deep inner peace. At every detour along the way, her sobering story stays packed with irreverent humor and hard-won optimism. What emerges is a front-line report on living life to the fullest, #KeepingItFriel and celebrating your inner party girl–even in sobriety.