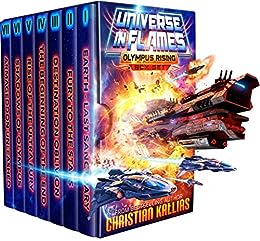 An ever expanding universe, mixing Military Sci-Fi, Space Opera & Mythology. Epic Space Battles, Immortals and Gods battling one another in this Good versus Evil tale of galactic proportions, with deep characters, which according to readers are leaping out of the page.

Over thirty active characters with distinctive arcs where nothing is ever clear cut. With tales of redemption, courage, heroism, and even sacrifices are common place in this epic saga of Good versus Evil, that includes world building elements spanning thousands of years.

The Greek & Norse pantheon like you’ve never experienced before. From Zeus to Odin, and every other deity in between, find out the true origins of the Gods. Be ready to also witness battles against mythological creatures like the Titans, Dragons & Furies.

Massive fleets engaged in the battle for the universe, with strategy at the center of every battle, and constantly evolving technologies.

Dogfights that put you, the reader, right into the cockpit of a star fighter, dead center throughout the heart of every battle.

Audible version of the books available

Would you rather listen to your epic Space Opera instead of reading it? Or perhaps you’d like to read while you listen (with whispersync)? Not a problem, you can find Universe in Flames audio books, exclusively on Audible. The very talented Zachary Johnson brings Universe in Flames’ characters and storylines to life.

Extras that flesh out the main story

Be it origin stories or side quests that happen in between (and sometimes at the same time) as main events of the novels, Universe in Flames already features a plethora of additional content with more to come. These stories add more layers to many of the main UiF characters. Better yet, these are included in the Audible versions.

An intergalactic war has real consequences, and Universe in Flames is full of shocking, unpredictable moments that will tug at your heart strings. No one is safe when evil forces who have lurked throughout the galaxies and alternate dimensions for eons decide to wake up from their slumber and eradicate all forms of life throughout the universe.

Want to escape to far away galaxies with characters that will stay with you long after you’ve read their adventures? Then UiF is the story for you.